Announcing a fund raiser for Kincardine Pride. The Deceiving Divas, presented by the Grey Bruce Labour Council will perform in Kincardine on September 4th, 2022. Tickets are available on Eventbrite. $50 dollars per ticket, cabaret seating (four seats at at a table, 27 tables). Table reservations are not available and all tickets are purchased general admission. A Kincardine Pride partner, the Grey Labour Council is pleased to present this event. Amongst many that make such an event possible, special thanks to Kincardine Centre for the Arts, Grey Matter Beer, The Bruce, Affiliates and friends of Grey Bruce Labour Council.

Surely congratulations from former Prime Minister, Stephen Harper, is on its way to the Mayor and Municipal Council of South Bruce Peninsula. In 2011 the Conservative Harper government locked the workers of Canada Post and members of CUPW out and then ordered them back to work. All done in some misdirected and misguided attempt to convince Canadians that Harper and his cronies were exhibiting some form of genius in the world of labour relations. Of course, it was a bombastic attack on workers for some imaginary and hollow belief that team Harper would be seen as “tough on strikers”. “Just as Harper and his cronies were seen as impotent in their make believe and hollow actions, Mayor Jackson and the rest of the council of South Bruce Peninsula will be seen as tone deaf regressive thugs who are too timid to get down to the meat of intensive and good faith bargaining”, says Kevin Smith, President of the Grey Bruce Labour Council.

Dave Trumble, Grey Bruce Labour Council VP for Bruce, recognizes that the tactics undertaken by the South Bruce Peninsula Council and under the leadership of Mayor Jackson are the symptoms of people with an absolute disdain for their employees. Trumble is hoping that any contractors showing to work for the municipality while the workers are locked out will understand that they will not be treated any better by the employer. Further, “any workers taking on the work of the locked out workers must understand that this is scabbing, and it is hoped that South Bruce Peninsula will hear only crickets when the call goes out for contractors, or scabs if they show up”.

Grey Bruce Labour Council VP for Grey, Chris Stephen, knows the tactics used in bargaining with municipal employees. Stephen has vast experience and knowledge through his years of experience as an active member of CUPE. Stephen is clear in his view on the situation. “The only way to meet an employer, an employer entirely responsible for the situation, is to meet them head on”. Under no illusions about the work required to get people to bolster the picket line, Stephen has already volunteered to start the work of getting Labour Council affiliated unions and friends of labour to the picket line and to make noise all the way to the election this fall when this council will have to answer for needlessly taking the food of the tables of their employees and their neighbours”.

The negotiating position of the union members, members of SEIU Local 2, was reasonable. As with most anti-worker and anti-union employers the strategic value of paying a reasonable wage is overlooked. The workers of South Bruce Peninsula would be plowing their money right back into their municipality. What better way to generate more economic activity as so may communities are attempting to recover from the pandemic?

Mayor Jackson is quoted in a press release as being concerned about a strike during the peak summer season and then also refers to being worried about the workers striking at any time. Of course, we are nowhere near the summer season and a strike vote mandate is not a guarantee of a strike and if Mayor Jackson were remotely knowledgeable about negotiations it would have been known that this is anything but unusual in bargaining across Canada and throughout the union movement. There was ample time for negotiations to continue, but myopia won out at municipal council for South Bruce Peninsula.

The Grey Bruce Labour Council has been the voice of workers in our region since 1956 and welcomes all media inquiries.

South Bruce Peninsula Locks Out Outside Workers | The GREY-BRUCE LABOUR COUNCIL, Representing the Needs of Working People Since 1956 (wordpress.com) 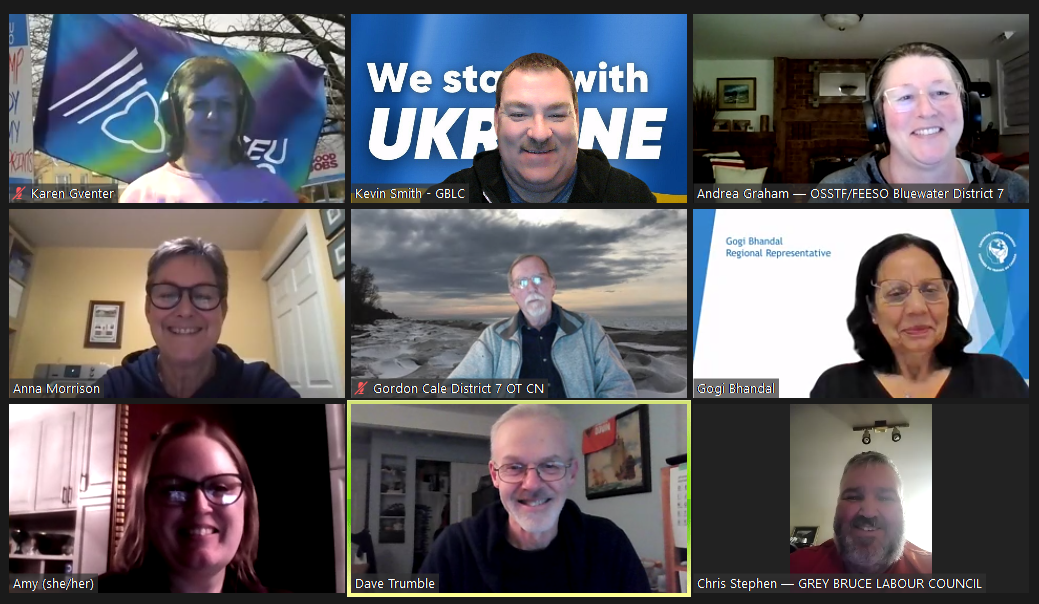 February 2020 was the last time that the Grey Bruce Labour Council Delegates met and were invited to meet in person. Since that very day the labour council has been, with the support of the labour council executive, delegates, members and friends of labour, led effectively and vigorously by President Kevin Smith. The Grey Bruce Labour Council been a clear and loud voice for workers in our region while experiencing the same uncertainty that all of us have undergone as a result of the global pandemic. Smith has kept the council an active, operational and a cohesive entity continuing the relentless battle to prevent the gross and profound erosion of the rights of workers that profiteering corporations and regressive governments at all levels and their allies have undertaken while vast swaths of society have been subject to the tragedy and vulnerability associated with a virus that has devastated so many.

In a very clear endorsement of this leadership, Smith, the labour council executive and the trustees were installed at the February 28th meeting by acclamation. Smith and the executive have all been returned. The trustees, all acclaimed, see a changes in two of three faces. “Workers in our region should feel proud of the work the labour council does and certain of the commitment as the executive combines over one-hundred years of cumulative experience in helping workers, voicing the needs of workers and leading the struggle against those that would turn the pandemic into the greatest takeaway of the rights of workers in more than a generation-going back to the horrific days of the Harris Tories!” says Smith.

The Grey Bruce Labour Council has been the voice of workers in our region since 1956 and welcomes all media inquiries.

February 1, 2022
Attention: Affiliate Presidents
Please find attached, a copy of the 2022 application form for the Day of Mourning
Award. This annual award is sponsored by the Grey Bruce Labour Council and Bruce
Power and is awarded to three high school students in Grey and Bruce who will be
selected to deliver a presentation that shares, through their experiences, an awareness
and knowledge of workplace health and safety issues. The value of each Day of
Mourning Award is $250. All high school students in Grey and Bruce Counties are
eligible to apply.
In your capacity as Affiliate President, you know the importance of workplace health and
safety. We are asking for your support in making this award opportunity available to the
children of your members.
For more information about the Day of Mourning please contact:
Grey-Bruce Labour Council – [email protected]
or
Anna Morrison, GBLC Sergeant at Arms
908 Brownell Dr.
Kincardine, ON, N2Z 1N2
Thank you for your support.
This Award is Sponsored by
Bruce Power
Grey-Bruce Labour Council